North Shore Brass is one of New Zealand’s most active community bands as it has four bands that perform in competitions, local events, parades, civic events plus a regular concert series based in the ball room of the Spencer on Byron Hotel and a highly popular Christmas @ Holy Trinity combined with Westlake Girls High School at Holy Trinity Parnell.

The lead band is an A grade band that competes successfully in our national contest each year – it is currently ranked third in New Zealand’s highly competitive A grade and is the champion band of Auckland.

The band is fortunate to receive some support from the Devonport Takapuna Local Board, part of Auckland Council, and this support began at the band’s formation in 1923 and recognises the civic duties across th e area to entertain and provide live music. The band’s name has evolved over the years as the area moved from a borough to a city and finally part of the super city of Auckland.

With over 80 musicians involved in our organisation we are the largest musical group on the North Shore by participation. 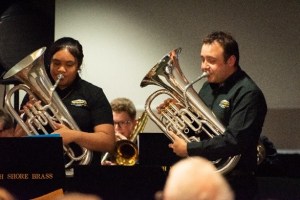 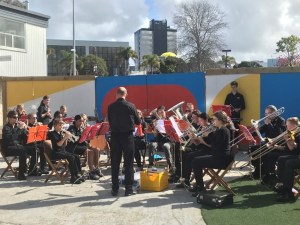 Formed in 2013 this group was soon meeting an unmet need in our community for quality teaching and banding in general as it attracted returning adults as well a raft of students from local schools. It now has three levels of bands:

In 2019 we were very proud as the principal cornet of the Academy Band, Liam Wright, was awarded New Zealand Junior Champion of Champions at age 15 years. By playing in the “top” seat we gave him some leadership experience that helped him in his confidence at competition time.

There are now over 80 musicians through our band rooms on a Wednesday aged from eight to eighty with many families involved – mum and son, grandfather and grandson.

This part of our organisation is experiencing an un-precedented growth and success as it has allowed musicians of all levels to be involved.

The band is an incorporated society and a registered charity. It relies on donations, grants, subscriptions, band room rental and concert income for all its income. All this is managed by our volunteers who form our committee of eight people. Committee members come from a broad spectrum – students, business owners, accountants, engineers, professional musicians and so have broad expertise in business as well as in musical fields. 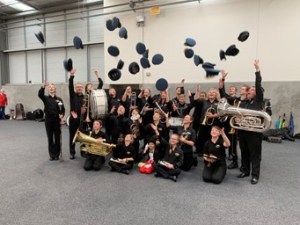 Our Academy Band at Hamilton Contest 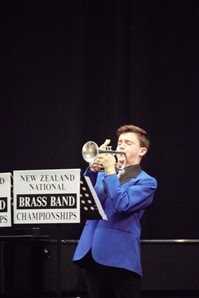 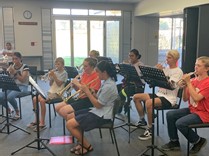 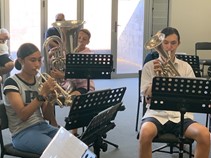 The band has hosted Harmen Vanhoorne from Belgium each July since 2015 to perform with the band at competitions, concerts and teach our senior and student musicians.

He has fallen in love with New Zealand and has moved to our country from Belgium in early 2020 under a talent Visa arrangement with Immigration NZ.

He is a world class musician, conductor, trainer, teacher and player. He is regarded as a virtuoso  cornet player and until recently sat on the principal cornet of our A grade band (the leader of the band – music like an orchestra).  He recently took over the baton and is now the Director of Music for North Shore Brass. In 2020 he was also appointed as principal cornet of the National Band of New Zealand.

He has a Masters’ degree with “High Distinction” in trumpet and cornet performance from Lemmens Institute in Leuven Belgium and has been crowned soloist of the year in Britain and Australia. 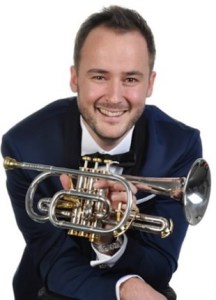 We wish to harness his talent by offering him some part time work as he establishes himself. He has been offered casual positions at Auckland University, and also the Auckland Philharmonic Orchestra. He also works at many high schools and intermediates in Auckland teaching individuals, bands and small groups.